A live action short film that blurs the lines between the whimsical and macabre, Return to Fable Grove is a psychological thriller that explores themes of family dynamics, psychosis, and memory. Through a blend of gritty narrative, campy puppetry and 80's nostalgia, the film tells the story of Eli Walker, an estranged son who returns to his childhood home only to be confronted by his traumatic past. He experiences a warped reality which is manifested through the world and characters of an 80's TV puppet show 'Welcome to Fable Grove'.

Michael is a producer, writer, illustrator and editor with a passion for screenwriting and new and interesting creative storytelling. He is currently working in collaboration with a group of very talented students on his CMP Major Project 'Return to Fable Grove' which has the potential for future revenues as a feature film or television series.

Script to Screen #1: A sinister wizard sits silhouetted in a darkened throne, Willow sits beside him. Eli paces slowly, tense with anger. 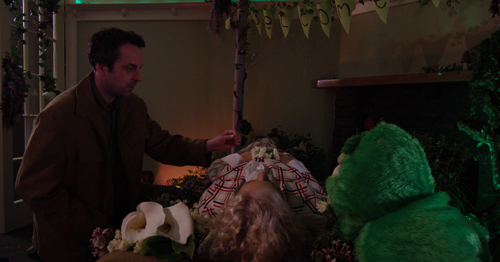 Script to Screen #2: Willow takes Eli's hand and leads him over to Janice. She helps him place a flower on his mother's body.

Script Supervision on the set of Fable Grove.